A Novella by Keith Henderson 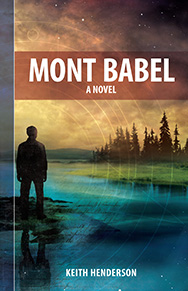 To order right away using your credit card, click below on Buy Now.

For other payment methods, complete order form below...

1. Just fill out the fields below, and press SUBMIT.

2. You'll get a prompt acknowledgement of your order, confirming your total price.

3. Then print this page, and enclose your check or money order.

“Where is everybody?” That’s the question physicist Enrico Fermi posed to his Manhattan Project colleagues now 70 years ago. They knew what he meant. Decades of reaching out to intelligent beings elsewhere in the universe, and no response. Zero. Nothing. A fact which remains true today .Mont Babel sling-shots off the Fermi paradox using the opposing forces of father and son. Jim Benedict’s a humanist, a man of the word, his son an engineer who’s bored by Shakespeare and likes the NFL. “In the beginning was the word. In the beginning was the Big Bang: two party bumper stickers of our current malaise,” writes Jim Benedict. Father and son rarely communicate. If they do, it is by email. What brings them together is the lovely Iris Doubt, Tom Benedict’s south African geologist girlfriend, one of the Ariel School children who claimed to have been visited by aliens. Now working in Canada, she spends her free time as invitee to UFO conferences and as investigator of impact craters, one of which is l’oeil du Québec, Mont Babel. Macrocosm meets microcosm in Mont Babel, quantum mechanics and astrophysics, neutrinos and black holes, raising questions about perception and consciousness, heaven and family peace.

Mont Babelfeatures an Introduction by Don C. Donderi, author of UFOs, ETs, and Alien Abductions: A Scientist Looks at the Evidence

"Explore the prickly edges of Science and Religion as Jim Benedict is unexpectedly invited by his estranged son Tom, to meet a beautiful geologist, famous in the UFO scene since her own childhood close encounter. Seeking reconciliation, Benedict reluctantly contemplates the possibility of alien visitations through conversations with Iris who shares her impressions of the extraterrestrial visitors as non-interfering, discreet/discrete masters of ‘existential decorum’. In their quest for knowledge, the young scientists scale philosophical as well as geological heights, the Stratosphere of Las Vegas, and plummet into sinkholes, both emotional and volcanic. An intellectual tour de force worthy of Umberto Eco, this novella will fascinate the reader with its dazzling bricolage of poetry, philosophy, ufology lore, and esoteric history of Quebec.”

Keith Henderson has published five other novels with DC Books, The Restoration (1992), The Beekeeper (1990), The Roof Walkers (2013), Acqua Sacra (2016), and Sasquatch and the Green Sash (2018), political essays from when he was Quebec correspondent for the Financial Post (Staying Canadian,1997), as well as a prize-winning book of short stories, The Pagan Nuptials of Julia, 2006). He led the Equality Party during the separatist referendum of 1995, taught Canadian Literature at Vanier College for many years, has sat on numerous boards in Anglo-Quebec including ELAN and the AELAQ, and is currently President of The Special Committee for Canadian Unity. He is completing a critical autobiography with special focus on the works of Edith Wharton.

List prices above do NOT include applicable taxes. Offer prices on the left DO!

Your bookstore is an essential part of your community.

Did you know you can shop online for fast delivery to your doorstep from many local bookstores across the country?

Because bookstores are *magic*.